FACING REALITY ON THE LAST DAY OF THE TRIP 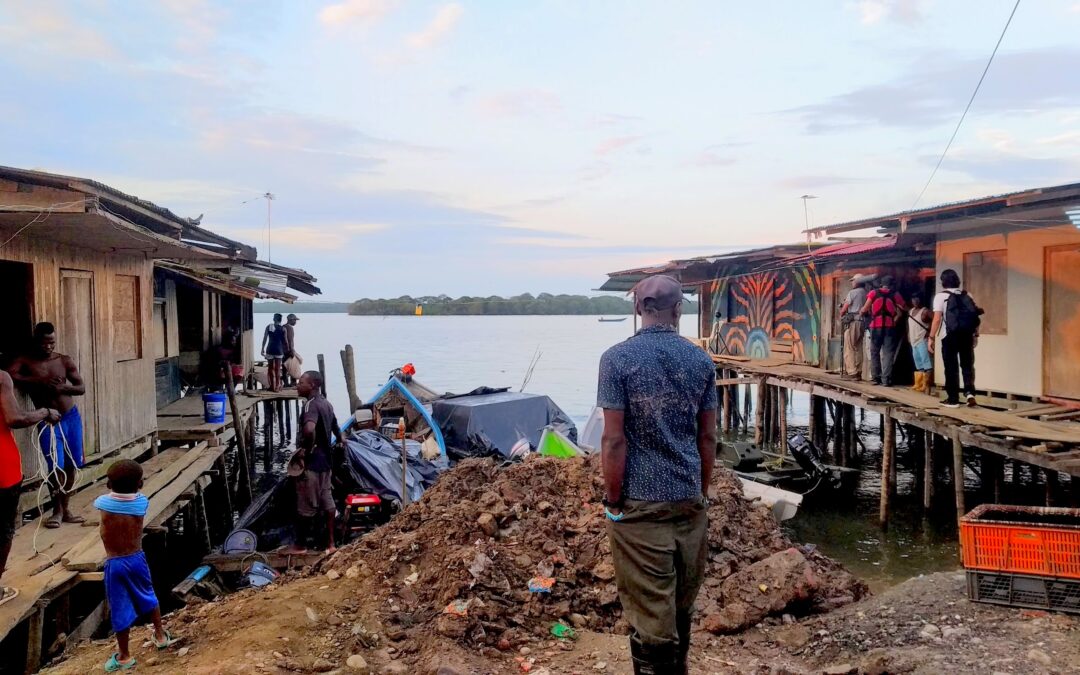 Entering the Humanitarian Zone is like being in another country, behind the doors that separate Puente Nayero street from the rest of the area, Yasmani awaits us, the wooden houses, the dirt road, the Police and the National Army that take care of the inhabitants seem to transport us to a place that you only hear about in the international news section. We whisper at first, we do not want to bother anyone.

Puente Nayero has a violent history. Entering here requires permits and accompaniment from the Gaula; stilt houses (palafito) with painted artists murals were once “Pique houses“. Before becoming a humanitarian zone, we would have to have sought permission from the “gangsters” or the “owners” to enter.

With our character Hilario Reina

There is calm in the air, the fishermen’s boats are in their port, some look at us well, others not so much,Yasmani Grueso tells us that community work has that, there are those who like it and those who do not.

We are recording and the noise of a boat bursts in with force. The fishers are the reason for our presence in the place. The social leader introduces us to Hilario Reina, a fisher of the Nayeros beach fishers’s organization of which Yasmani is part of.

Life is hard, public services are not present in the entire street, garbage collection is scarce and the drinking water service only reaches half of the area it occupies, from then on the only way to get water supply is through the hoses that we can see crossing the road. 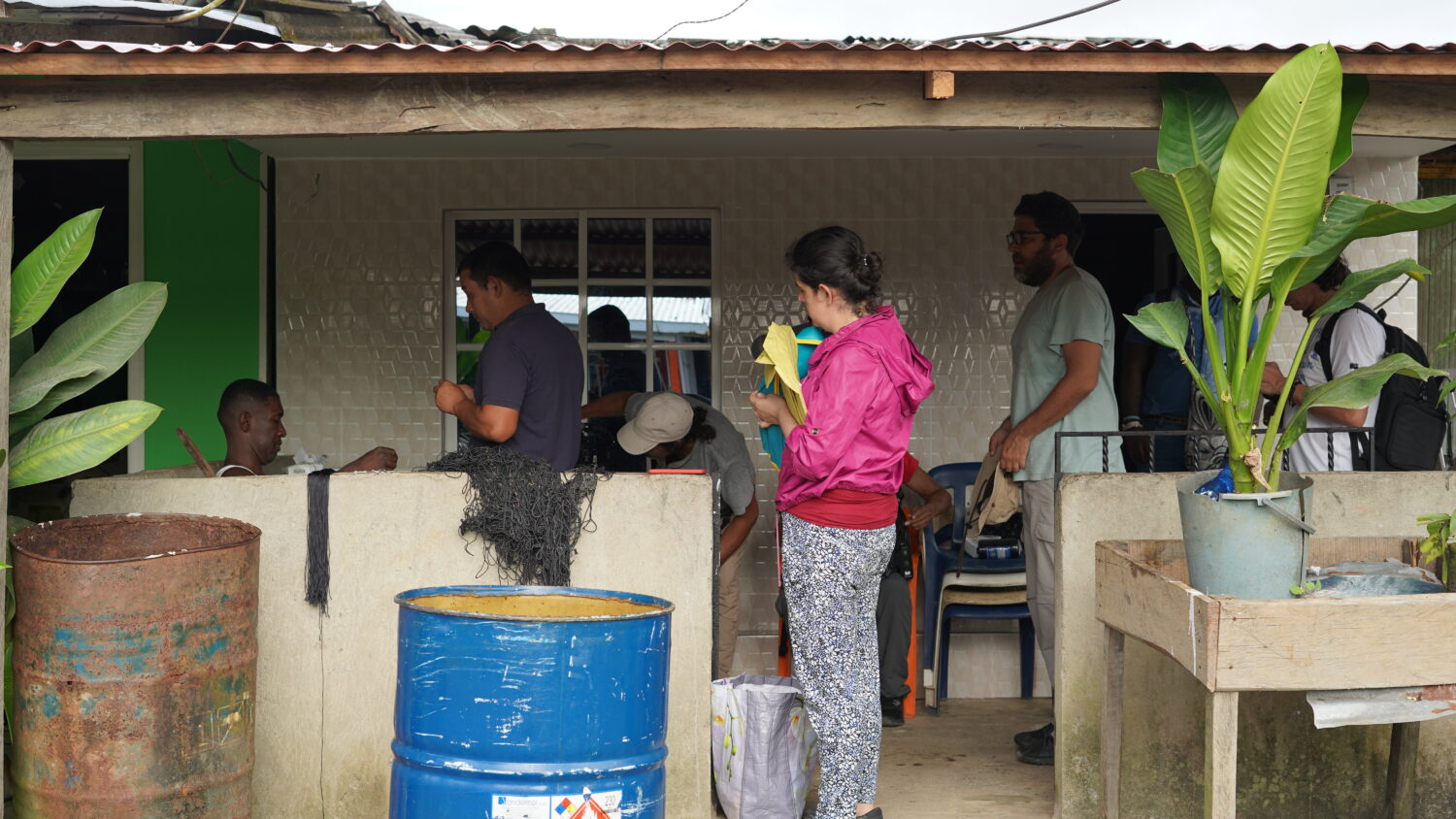 The shooting team and its inhabitants at the Humanitarian Zone

Security in the street come from the military, long ago when the inhabitants of Nayero tired of living under threat, they denounced those of one or another violent group who were fighting to take over the area and its inhabitants. To this day threats are constant, but Calle San Francisco is a calm space amidst of chaos. Yasmani points out to me other houses in adjoining streets, it’s not a secret what happens in them, but it is not said aloud, it is dangerous, therefore the constant presence of the Navy and the Gaula has become the hope of being able to sleep peacefully for those who live there.

2014: The first humanitarian space in an urban context in the world

Yasmani continues to talk to me about the problems in the area. We observe the team from afar recording the interview with Hilario. He tells how the port is also one of the great threat factors for the population of Nayeros. We talk about his history and that of the street. Both are stories of strength and resistance, which he says shows how difficult it is in a place like this to seek a change for the community.

Between the distrust and the habit of some, the struggle grows strong. From his notebook, he takes a photo; The one of his sister murdered by the guerrillas, he always wears it, it motivates him to fight for a better place and it helps him to show those who doubt that he is no stranger to the losses caused by the conflict. He tells that he was at the peace tables as a representative of the victims. He talks about his work with the fishers, children and young people of the humanitarian zone, the people who have joined this struggle.

During the investigation, Jemny, owner of the Palafitos Restaurant, had told us about the place, the history of the palafitos, their nautical heritage and how violence changed the vision of these places.

The beauty and practicality of the houses on the sea was forget behind the black bags and the carelessness that sought to hide the shady businesses that occurred inside. Today, thanks to the work of people like Jemny and Yasmani, travelers from various countries can visit without problem as long as they are accompanied by a good local guide.

The afternoon is approaching and we receive news that puts our production company (aka, better known as May)) to run, there are landslides on the road that connects Buenaventura with Cali and the car that would take us back has not been able to enter, they recommend us that we take our things and leave early because the weather is not good and there could be more landslides on the alternate routes.

We had plans to take advantage of this day until the last minute, especially a visit to the market to interview viche producers. 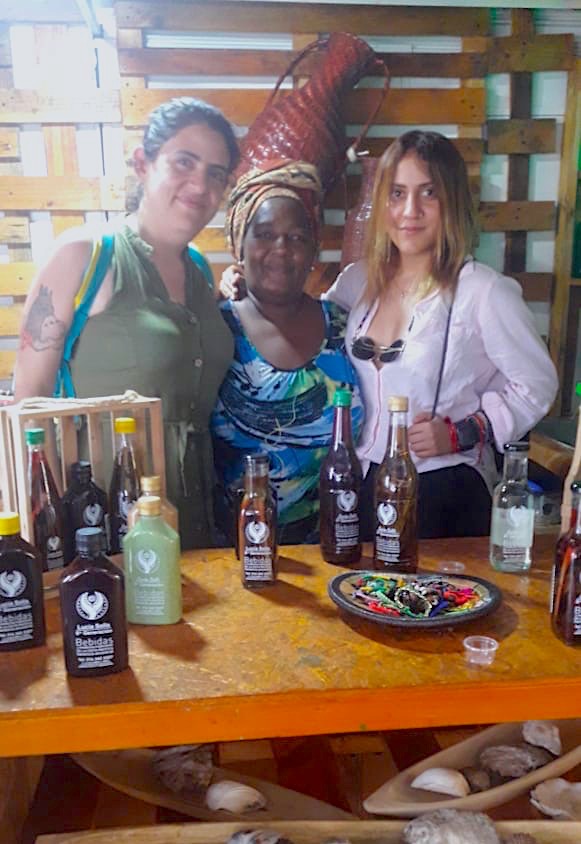 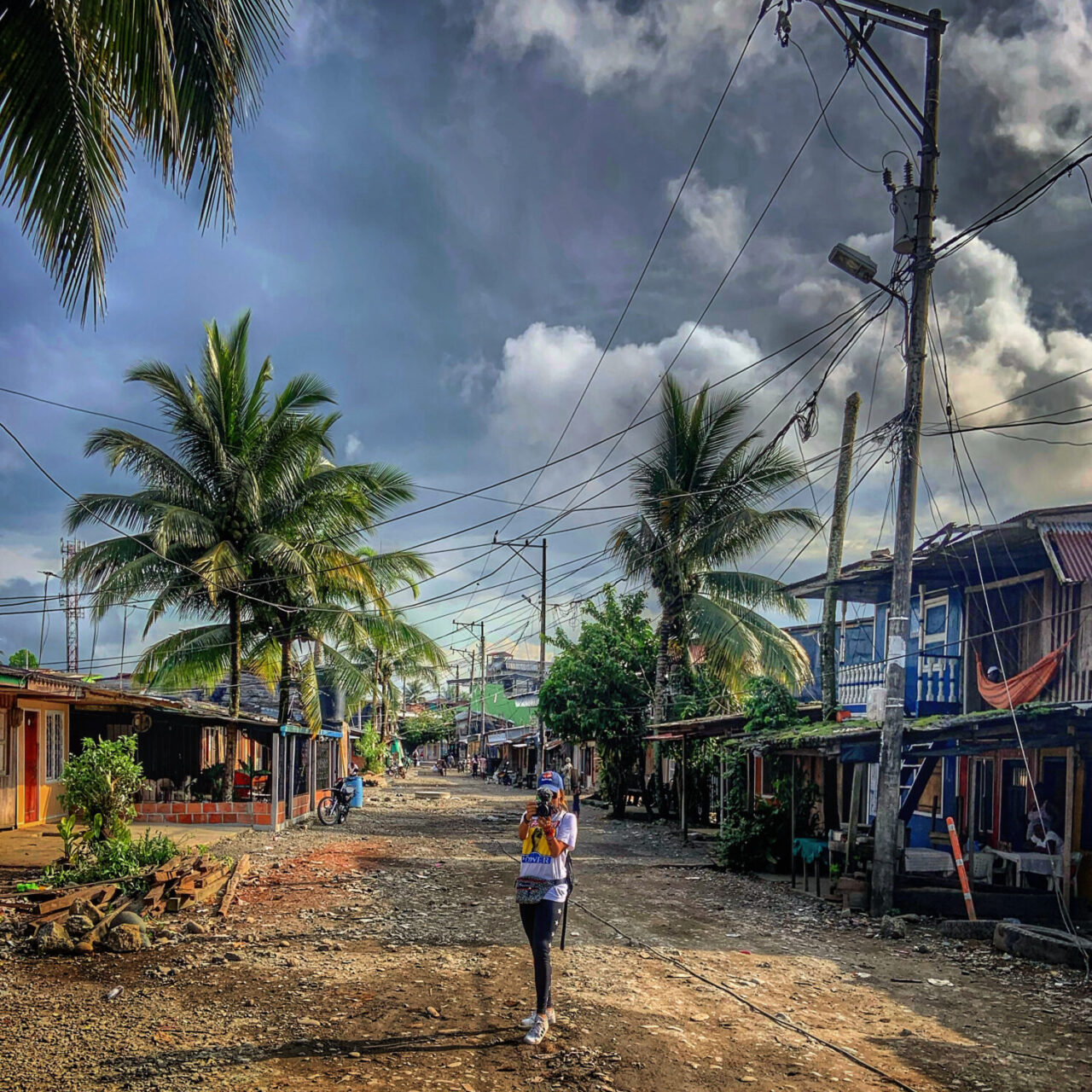 Our director and producer on Calle San Francisco

During the investigation, we had come into contact with Lucia Solis,, one of the best-known producers of this drink and teacher of ancestral knowledge. I remember that day very well, because it brought a menstrual cramp of those that hurt so much. We had gone to lunch at the market in front of the plaza of the mayor’s office looking for authentic Pacific food. Our contacts said that in that place we could find some. When we arrive at the entrance on the first street (first street # 1-01 to be exact) we find the Lucia Solis store, where she offers the products of her brand Semillas de Vida (Life seeds).

Interested as we were in contacting experts and masters of traditional trades, we said hello and agreed to return after lunch. Just as we had agreed, we went back to her; I was suffering, the menstrual cramp had started a few minutes before and I was trying to put on a friendly face, but the wind of the fan caused me pain and I had that discomfort on the waist that only a woman can understand. Lucia told us about her products and about Destila Patrimonio, about the problems they had when a “very intelligent” businessman wanted to appropriate the viche ancestral drink and turn it into his brand. When she looked at me, she clearly understood what was happening and handed me a drink. Besides remembering the day because of the pain, I remember it because of the relief I felt after taking that sip of viche.

Lucía smiled, we talked about CURAO as medicine and even as a beauty tonic, about ancestral knowledge and how we should get in touch with the leaders of Destila Patrimonio… We thought that the meeting would happen on the last day of the expedition together with a new appointment with our friends from Funda Productividad to officially speak with them and get more images for the taste of Appellation of Origin and research material to new projects… But unfortunately all plans had to be suspended.

Arriving at the hotel, we were wondering about something else, how could we go back to Cali? staying one more day was impossible, from day one, the time of our talented filmmakers is limited and for the weather, it was not safe to stay.

We asked, there was a rumor that the roads would be closed soon, things would turn as May would say Pelúa (difficult) so we decided that the best thing was to go to the bus station to look for tickets, although we will have to carry the equipment all the way through.

A trip that usually lasts an hour and a half, because of the work on the road took 4 hours, of which we were waiting to pass through one of the lanes. I used this time to sleep and my colleagues to capture some natural environment, extremely useful elements when assembling all the products of this expedition.

Arriving in Cali, we said goodbye, and it was then we spoke of everything that happened on this trip and others. We thought it would be nice to share all these experiences with you. What do you think, we were right?

Finally, reflecting on our commitment to the community to tell, give visibility to their processes and what they are doing, we thought about creating a video for them they could share… This did not seem enough, we believed that it did not cover everything we promised… So along with Gustavo and May, we decided to use this material for creating the first blog entries,  two documentary series and a podcast season: in for a penny, in for a pound, that’s how Buenaventura Expedition was born, regardless of the fact that there was no money or support from any tourist or cultural institution.

Thank you all, leaders, activists, connoisseurs, traditional cooks and friends of the Colombian armed forces. All of you are the reason and the support with which this stage of our project became a reality. The circumstances the world is going through have prevented us from returning (2020) but we are more than eager to meet you and add a new chapter to La Mochila Desgualanga’

Do you want to know more about the experiences lived on the last and fourth day of Expedition Buenaventura? Here you can hear in the voice of its protagonists how we got to the Humanitarian Space.

Hello humans! At the end of the Expedition I have compiled some photographs, videos and links of our fourth and last day in the Colombian Pacific. How we got to the Humanitarian Space and met our talented hosts who taught us about friends and foes at sea.

I share several links of the recommended routes on the interactive map.

Thank you all for listening and reading.

We are happy to hear from you and we will be attentive to your messages.

THE PROMISES OF THE PODCAST

How we got to the Humanitarian Space

Friends and enemies at sea

The fighting men of Puente Nayero

Sound Journey: The Pearl of the Pacific

Listen to the fascinating voice of Gustavo narrating The Legend of the Pearl.

How we relate the department of Nariño with the water element.

Listen to May’s voice explaining which is the most exported domestic product of the Pacific coast. Take notes!

THE PROMISES OF THE PODCAST

YOU WANT KNOW MORE ABOUT ?  Visit us blog.